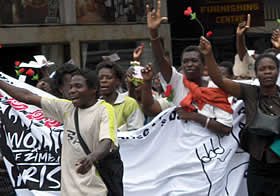 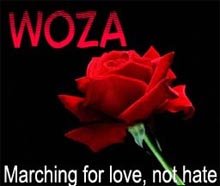 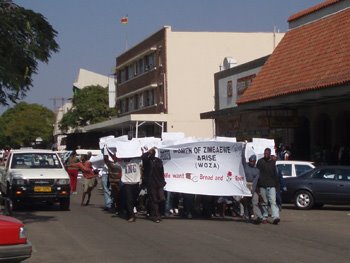 Open Letter to President Thabo Mbeki June 25, 2007 Posted by admin No Responses His Excellency Mr M W Makalima The Ambassador The South African Embassy HARARE Your Excellency, Talking about TALKS – WOZA/MOZA's view – ten steps to a new Zimbabwe. WOZA has been reading and hearing about 'the talks' and wish to express our views about these. We ask that you kindly relay this letter to President Thabo Mbeki. Women and men of WOZA have initiated a non-violent campaign with the aim of mobilising Zimbabweans to demand social justice from their leaders. Our mandate is to hold leaders accountable and mobilise people to demand leaders who will deliver all aspects of social justice and a genuinely people-driven constitution. We will not vote in an election without the latter. As we deliver this letter, Zimbabweans are living in a state of fear and uncertainty. They suffer discrimination in all its forms and are unable to earn a living. Levels of poverty are high; unemployment is at 82% and inflation at four figures. Non-existent service delivery also makes life difficult. Access to education, housing and other basic needs is now only for the rich. The HIV/AIDS pandemic, which has created thousands of orphans and child-headed households, is a social catastrophe compounded by a failed healthcare system and little or no access to ARVs. Further loss of valuable human resources is happening due to people leaving the country in large numbers. People have been unsuccessful at holding their government accountable due to a raft of repressive laws and shrinking freedom of expression/media space. Corruption at all levels of government and the politicisation of all aspects of society has led to chaos and disorganization in every sector. We believe that only including politicians in the SADC initiative will perpetuate the problem rather than deliver a solution. We have an alternate view, which we drew up after consulting widely with our membership, and have attached it below – '10 Steps to a New Zimbabwe'. We would like to know what mandate South Africa has from SADC? What do Presidents Mbeki and Kikwete wish to achieve by this mediation? We are hopeful that they wish to bring about a new government AND assist this new government to bring about meaningful political, economic and social reform. We wish to suggest that for the South African government to establish itself as a genuine mediator, it would need to secure the cooperation of the present Zimbabwean government. They must be persuaded to allow a transitional process to go ahead without interference; this will obviously mean that they have to step down from office. WOZA leaders and members commit to working hand in hand with any political or civic leaders who will honour the wishes of the Zimbabwean people and deliver social justice. By our peaceful presence outside your embassy gates, we demonstrate to you that we will continue to exert nonviolent pressure for them to step down by exposing the injustices they have brought down on the heads of their citizens. Please help us to birth a new Zimbabwe where Zimbabweans can enjoy equality and live with dignity. We also attach our vision document, a resolution made after an eleven-month, nationwide consultation process. During 2006, over 284 meetings, consulting almost 10,000 rural and urban people on social justice were conducted. The people spoke clearly about what they want in a new Zimbabwe and their contributions are contained in the People's Charter attached below. We ask that you read it knowing that it contains the dreams and desires of a heartbroken nation. With respect, Members and supporters of Women of Zimbabwe Arise (WOZA) and Men of Zimbabwe Arise (MOZA)