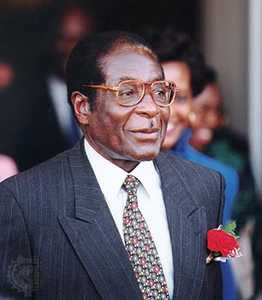 Having ruled for 27 years, it doesn’t look like Zimbabwe’s President Robert Mugabe is in a hurry to quit even as his country falls into pieces.

Mugabe’s ruling Zanu-PF party has picked on him to run for yet another term. What stops him from retiring? A brief history of his “personal rule” is necessary in order to understand why he is staying put.

The predecessors of Zanu-PF were born in the context of mine and railway strikes in the late 1940s. The evolution of nationalism in southern Africa led to the establishment of the Southern Rhodesian African National Congress (SRANC); combining Salisbury’s City Youth League with Bulawayo’s emerging professionals who were however reluctant to lead the new party. Joshua Nkomo was therefore elected a compromise leader. Salisbury is the colonial name for Harare.

When the professionals finally joined the nationalist movement, it was hampered by government restrictions, inability to lobby effectively in the international arena, conflicts over compromises in London constitutional conferences and the extent to which the armed struggle should be enjoined.

As usual, generational and ethnic factors came into play and even the China-Russia divide even as both supported the struggle.

This mix contributed to a leadership crisis, leading to the formation in 1964 of the new Zimbabwe African National Union led by Ndabaningi Sithole, with Robert Mugabe as publicity, and later, national secretary. Nkomo remained head of the Zimbabwe African People’s Union—as the SRANC became known.

Aside from a paper-thin “Patriotic Front”, starting in late 1976 and ending in Mugabe’s command before the 1980 elections, “unity” between the two movements was never consummated until 1987.

Between 1964 and 1987, the tensions between the quest for unity and the efforts of leaders to consolidate their own power – using political and ideological resources ranging from ethnic identification to regional and superpower rivalry – ran through the ostensible unifying project of a “national liberation” war and its post-independence consolidation.

In 1974 Ian Smith, leader of the Rhodesian state, and the Zimbabwean nationalists were persuaded to hammer out a moderate compromise in a ‘détente’ (an understanding) led from Lusaka, Zambia.

This came after generational and ethnic conflicts in both Zapu and Zanu. To complicate matters further, a group of nationalists under Bishop Abel Muzorewa emerged in 1971 to contest a British initiative testing opinion on a new constitution.

The agreement among the parties led to the release of Zimbabwean leaders detained in Rhodesian prisons since 1965. Mugabe, one of those who had been detained had captured Zanu’s leadership in what appeared to be a coup in prison. That coup was never confirmed by a full party congress until 1984, four years after Mugabe’s party was in power.

The route to that authentication is the root of his need and ability to stay in power. Neither the front-line states nor Zanu rank and file accepted Mugabe’s rise easily—although ‘deposed’ Ndabaningi Sithole’s bad choices did nothing to slow the usurper.

The 1974-1979 period marking Mugabe’s rise up the Zanu hierarchy can be divided into five moments, all important markers of the difficulties he has in his letting go of power.

The first is the still unsolved March 1975 assassination of Herbert Chitepo, the party’s national chairman who had shepherded the struggle from its Lusaka base since 1966. Some quarters associate Mugabe circles with the murder.

Mugabe also eliminated a perceived challenge from a group of radical and unity oriented young Turks who formed the Zimbabwe People’s Army, taking over the armed struggle while Zanu leaders were imprisoned in Lusaka on the charge of murdering Chitepo and Mugabe was under house arrest in Mozambique. Known as the vashandi (Shona for workers), they established Marxist training schools and a new ‘line’ for unity.

Mugabe appropriated their militant Marxism but altered their plans for military unity with Zapu to a looser diplomatic and political front: thus the ‘Patriotic Front’.

While sidelining the young radicals, he patched together an alliance of exiled and internal Zanu actors and the army leaders which helped him deal with the vashandi challenge in January 1977 by sending its leaders to Mozambique’s prison camps.

By July of the same year, a special conference announced Mugabe and his ‘enlarged Central Committee’s’ ascendancy. Also within a year Mugabe and his cohorts sidelined a group of politicians who belatedly decided to champion the vashandi cause and deeper unity with Zapu.

The ‘Hamadziripi – Gumbo Group’ was accused of attempting a ‘coup’ in much the same way as the vashandi and they were also sent to Mozambican prison camps. Josiah Tongogara, the guerilla general who had joined Mugabe in ridding the party of the young ‘rebels’ but later started advocating unity with Zapu also died in a mysterious car accident.

‘Unity’ with Zapu happened only after the North Korean trained Fifth Brigade tore the heart out of the party by killing up to 35,000 Ndebele people and torturing many more, in the search for a few hundred dissidents thus justifying the terror.

After being expelled from Zanu for his vociferous condemnation of corruption within the corridors of power, Mugabe’s once trusted lieutenant Edgar Tekere started his own party, the Zimbabwe Unity Movement. This opened Zimbabwe to the idea that opposition parties could be based on other than ‘tribal’ motivation. Its credible urban showing in the 1990 election also showed that Mugabe’s politics held more rural than urban appeal.

With World Bank/IMF structural adjustment policies hitting workers at the same time as the Zimbabwe Congress of Trade Unions (ZCTU) was weaning itself from Zanu-PF’s influence, the stage was set for widespread opposition to the ruling party.

However, Mugabe stymied a potential worker-veteran alliance with his September 1997 accession to the war veteran’s demands, which included a 20 peer cent promise of the land to be expropriated in the land reform programme therefore finding a new ally to replace those he had lost.

With a parliamentary election due in early 2000, Mugabe chose to unleash the allied ‘war vets’ on over white-owned commercial farms. Productive and white commercial farmers decreased from 4,500 in 2000 to under 500 in 2004. Wheat production fell to 170, 000 tons from the former 300, 000 average, the commercial beef herd went down from 1.2 million to approximately 150 000, inflation has escalated to over 2000 per cent as of now, and unemployment is well over 80 per cent— all these threatening to lead to an economic meltdown.

With the formation of Morgan Tsvangirai’s opposition party MDC in 1999, and its strong showing in urban areas, Mugambe might be there to stay, especially given that he could be called upon to answer for certain historical wrongs against Zimbabweans.