DOWN MEMORY LANE: WHEN A MINISTER'S ARREST SHOOK A YOUNG REGIME! 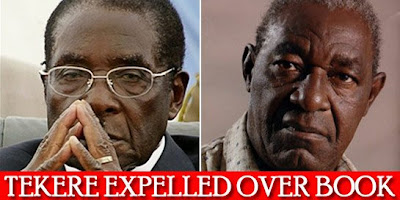 The attackers, some dressed in the olive drab fatigues of bush-hardened guerrillas, approached in an extended line. Their AK-47 rifles started blazing as they walked toward the dilapidated farmhouse. "They just opened fire on us," said Ralph Chadwick, a farm equipment dealer who was visiting the property with two other whites. "We scrambled for cover and beat a fast retreat to our cars as the firing got hotter." Returning with police 30 minutes later, they found the farm's white manager, Gerald William Adams, 68, dead with a single bullet in his back.

In many ways, the afternoon raid on Stamford Farm, a large estate southwest of Salisbury, resembled countless other incidents of scattered rural violence by trigger-happy ex-guerrillas. But the killing was different in one important respect: the suspected ringleader of the murdering band was Edgar Tekere, 43, Minister of Manpower, Planning and Development in the four-month-old government of Prime Minister Robert Mugabe. He is also the secretary-general of Mugabe's Zimbabwe African National Union (ZANU), and one of southern Africa's most prominent black nationalists.

Within 48 hours of the crime, the former guerrilla leader was compelled to give himself up to white police officers. He was put into a cell in Salisbury's Chikurubi Prison. The possible maximum sentence if he is convicted: death by hanging.

The bizarre episode confronted the newly independent nation of Zimbabwe with its most serious crisis since the end of the Rhodesian civil war. It threw Mugabe's faction-ridden ZANU party into confusion. It sent a jolt of fear through the white community just as whites were beginning to acquire confidence in the new black leadership. Finally, it raised new doubts about the durability of Zimbabwe's new constitutional community.

The police net closed in on Tekere after his official ministerial car, a blue Jaguar, was seen speeding away from the farm along with a white Mercedes-Benz. Within hours, the cars were traced to a Salisbury apartment complex. While Tekere and a number of his heavily armed bodyguards holed up inside, some 40 police gunmen laid siege to the building. After a lengthy standoff, the scene shifted to Tekere's high-walled suburban home, to which the erratic Minister retreated with his bodyguards.

Meanwhile, police authorities presented the facts of the case to Mugabe, who ordered Tekere's arrest. The next morning, Chief Police Superintendent John Carse and other armed officers surrounded Tekere's heavily guarded estate in St. Martins, a suburb of Salisbury. They confiscated a load of weapons, and then engaged in a lengthy discussion with Tekere and his lawyer. At one point, Tekere strode jauntily over to share a joke with newsmen. Said he: "I'm just talking to my friends, the police. That's all."

The joke ended when Tekere, still dressed in battle fatigues, finally hopped into his blue Jaguar and drove to Salisbury's central police station. There, in an unusual closed-door hearing, he was formally charged with murder and held without bail pending trial. Six other men, all from Tekere's personal corps of bodyguards, were also arrested in the case.

What had propelled an influential Cabinet Minister into mindless crime may have been a hot temper and a weakness for strong drink. The night before the killing, Tekere allegedly had been partying with some ex-guerrillas near Stamford Farm. Somehow they got into an argument with the farm's caretakers, a group of black soldiers who had served in the white-officered Rhodesian African Rifles before independence. Tekere and his cronies returned with their guns the next day, evidently intending to teach the R.A.R. men a lesson. Apparently, Farm Manager Adams was shot to death while trying to call for help over the farm's emergency radio system.

The case was a major blow for Mugabe, who was playing host last week to visiting Mozambican President Samora Machel. Described by aides as "embarrassed and enraged" at the alleged conduct of a longtime friend and comrade, Mugabe promptly sent word to Parliament that full justice would be done. Whatever the outcome of the judicial pro cess, the case would be sure to confront Mugabe's own leadership with a series of crucial tests and uncertainties.

One threat comes from within his own party. Mugabe's moderate policies have come under bitter attack from radicals like Tekere, who have called for a hard line socialist program and the expropriation of white wealth. There was the potential for a bitter internecine conflict if Mugabe were to allow a white-dominated police and judiciary apparatus to convict Tekere. The fierce, short-tempered nationalist (see box) holds the third high est party rank and commands a loyal following among many of the 25,000 guer rillas who remain in training camps scattered around the country.

Some observers feel, on the other hand, that a conviction would be to Mugabe's benefit because it could weaken the party's radical wing and enable Mugabe to replace a sometimes troublesome upstart in the secretary-general's post. It would also help Mugabe smooth his relations with Joshua Nkomo, his former co-leader in the Patriotic Front guerrilla alliance. In a series of personal attacks, Tekere had recently demanded that Nkomo be "crushed" and that his party, which controls four of the 25 Cabinet seats, be banished into permanent opposition. Tekere's removal from the political arena thus would gratify Nkomo and probably help heal the rift within the governing coalition. Ironically it was Nkomo himself who, as Home Affairs Minister, probably endorsed the police action against his greatest rival.

Also at stake were Mugabe's hopes for stemming the white exodus that has recently reached record levels of over 1,500 a month. Whites have been increasingly alarmed by the persistence of rural lawlessness, and the involvement of a Cabinet Minister in the latest cold-blooded attack seemed to confirm their worst fears. Says a U.S. southern Africa expert: "Whites have always had a kind of self-fulfilling prophecy that black rule would mean the end of all civilized standards. In the Tekere affair, they see the beginning of the end." Indeed, last week White Community Leader Ian Smith at first reportedly told Mugabe that he himself would join the exodus if the case was covered up. Later, however, he publicly praised Mugabe for his strong stand in favor of legality.

The affair may ultimately calm white fears and vindicate Mugabe's leadership if it serves to demonstrate his commitment to the rule of law. Said one Salisbury businessman: "At least it will reassure whites who were beginning to think those with government connections could say and do anything they want." Much depends on the final outcome, but so far many observers found grounds for reassurance in Mugabe's handling of his first real crisis.

—By Thomas A. Sancton.

With reporting by Peter Hawthorne